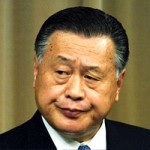 Yoshiro Mori is a Japanese politician and former Prime Minister of Japan who served the country from the year 2000 to 2001 as its 85th and 86th Prime Minister. Yoshiro Mori is mainly known for his frequent ‘slips of tongue and inappropriate actions’ that surfaced on many occasions in his political career. Though Yoshiro Mori failed to achieve distinction as Prime Minister of Japan, the emergence of Japan as a strong industrial country can be credited to the former prime minister who adopted revolutionary fiscal policies and several economic reforms. In 2004, Yoshiro Mori was awarded India’s third highest civilian award Padhma Bhushan for his contribution in world economy and education. A keen Rugby Player, Yoshiro is presently President of the Japan Rugby Football Union and the Japan-Korea Parliamentarians’ Union as well.

Yoshiro Mori was born on 14 July 1937 in Nomi, Ishikawa in Japan to Shigeki and Kaoru Mori and both of his parents were wealthy farmers. His family had a strong political background as his father and grandfather both had served as the mayor of Neagari. Yoshiro Mori lost his mother at the age of seven, when she died after a long period of illness. After her death, his younger sister Akiko became his surrogate mother and looked after him. Yoshiro Mori’s father died in 1989.

Yoshiro Mori received his degree from the Waseda University where he excelled not only in academic subjects but also developed many other qualities important for personal growth such as independence, and sense of responsibility. At Waseda, he played Rugby ardently and joined the University’s oratorical society, which has been a groundwork axis for many Japanese politicians. He met budding political personalities and great orators there at the University, where his dream of becoming a politician began to take shape.

After graduating from Waseda, Yoshiro joined the Sankei Shimbun, a major newspaper of Japan where he did reporting for sometime. The experience proved to be very helpful for Mori and his passion for politics continued and in 1962, he left the job to become a Secretary of a Diet member. At the age of 32, Mori stood for the election and was elected in the lower house in 1969. From that time on, he was reelected for 10 consecutive times. After the election, Mori joined the Labor Democratic Party.

In 1980, Yoshiro came under fire for his alleged involvement in the Recruit scandal. He had allegedly received a number of shares from Recruit Cosmos before they came in market, and sold them off after they were made public, thus making a huge profit. The scandal badly affected his political career ruining his reputation.

Yoshiro Mori assumed the office of the Education Minister in 1983 and employed several education reforms serving till 1984. He was elected International trade and industry minister in 1992 and was made construction minister in 1995. Yoshiro Mori has been appointed to many important positions with in the Labor Democratic Party, where he was twice appointed as the secretary general of the party. He was also the chairperson of the Policy Research Council and introduced many major policies.

Mori was elected the Prime Minister of Japan, when his predecessor Keizo Obuchi suffered a stroke on 2 April 2000. Mori, at that time, was the secretary general of the Liberal Democratic Party and a close ally of Keizo Obuchi. After assuming the power, he formed a three party coalition government and was again reelected Prime Minister in the same year. He remained in the position till 2001 and was succeeded by Junichiro Koizumi on 26 April.

Mori married Chieko Maki in 1961, who was a fellow student at Waseda University. The couple now has two children: a son Yuki and a daughter Yoko. They have a granddaughter Reiko. An avid Rugby player, Yoshiro never smoked due to his family’s teaching and his involvement in sports. His passion for Rugby and golf was so popular that he was often referred to as the ‘Rugby Prime Minister’. In 2005, he was made the president of the Japan Rugby Football Union.

Yoshiro Mori’s premiership is marked by his remarkable achievements in the field of economics and education. He devoted himself to what he called the rebirth of Japan, promoting significant economic and fiscal policies in order to make Japan a major industrial country. While as the Education Minister, he made education policy the center of his work, as he believed that education is the key to the future of a society, nation and the World. He was honored the India’s third highest civilian award Padma Bhushan in 2004.