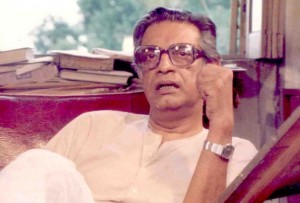 One of India’s most distinguished film directors Satyajit Ray, was born on May 2, 1921 in West Bengal. Ray’s films are of universal interest despite the fact that most of his films were made in Bengali. His films are essentially about those things that make up the human race – relationships, emotions, struggle, conflicts, joys and sorrows. Satyajit Ray, the master story teller, has left cinematic heritage that belongs as much to India as to the world. His films demonstrate a remarkable humanism, elaborate observation and subtle handling of characters and situations.

His first film Pather Panchali (Song of the Road, 1955) established his reputation as a major film director, winning numerous awards including best human document at Cannes in 1956 and Best Film in Vancouver in 1958. Pather Panchali is the first film of the Appu trilogy — a three-part tale of a boy’s life from birth through manhood. The other two films of the trilogy are Aparajito ( The Unvanquished, 1956 ) and Apur Sansar ( The World of Apu, 1959).

Satyajit Ray – A brief biography, Biographies for kids: 6_1.gif A versatile craftsman who worked in several film genres, Ray was known best outside India for his moving depictions of Indian family life. Two other outstanding Ray films, Jalsaghar (The Music Room, 1963) and Mahanagar (The Big City, 1963), deal with the changing nature of contemporary Indian life, whereas Charulata (1964) is a graceful adaptation of Rabindranath Tagore’s classic portrait of the Indian middle classes in the Victorian era.

In later films such as Aranyer din Ratri (Days and Nights in the Forest, 1969), Pratidwandi (The Adversary, 1971), and Seemabadha (Company Ltd., 1971), Ray focused on political and social themes without losing his humanistic perspective.

Satyajit Ray wrote all the screenplays of his films, many of which were based on his own stories. He also designed the sets and costumes. He composed the music for many of his films, including Ghare Baire (The Home and the World, 1984), based on Tagore’s novel about Bengal in the early 20th century. In 1978, the organising committee of Berlin Film festival ranked him one of the three all-time best directors. Just before his death, in 1992, Ray was given a lifetime achievement award by the Academy of Motion Picture Arts and Sciences. Other honours include Legion or’ Honneur from France and the Bharat Ratna in India. He died on April 23, 1992.

Ray’s films belong to a genre that includes the works of Akira Kurosawa, Alfred Hitchcock, Charles Chaplin, David Lean… all very different in style and content and yet creators of cinema that’s timeless and universal.