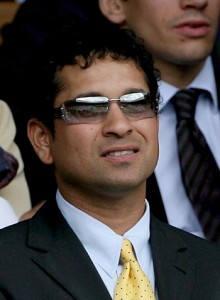 Sachin Tendulkar was born on 24th April 1973 in Maharashtra, India. He is often referred to as the Little Master or Master Blaster. In 2002, Wisden ranked him the second best player ever, after Sir Donald Bradman.

He had an elder brother, Ajit who encouraged him to play cricket. He also has a younger brother and a younger sister. Their names are Nitin and Savitai. He tried to make them play as well.

Sachin went to the MRF pace foundation where he trained to be a fast bowler. When he then-coach, Dennis Lillee, saw him, he politely suggested that Sachin look for another form of skill. His coach and mentor, Ramakant Achrekar used to put a one upee coin on top of the stumps. If Sachin could last the entire training session without being dismissed, he would get the coin, but if he was out, the bowler who got him took the coin. Today, Sachin treasures 13 of those coins

Sachin Tendulkar made his Test debut on 15th November 1989, at the age of 16. This game was played in Karachi, under the leadership of Kris Srikanth. sachin joined Mumbai’s Ranji team in 1988 and still plays for them. He joined Yorkshire in 1992 and is presently the captain of Mumbai Indians in the Indian Premier League.

sachin attended Sharadashram when he was young. Then he went to high school, after which he joined the MRF Pace Foundation, where he was trained by Ramakant Achrekar.  His first school was in Maharashtra, his birth state. He signed up to endorse for Pepsi in 1992 and considered to be with them till the end of his cricketing career. He signed up for Airtel in 2006 and Canon in 2004 and his term with Canon ends in 2009.

This award system started in 1889, when they had the Six Great bowlers of the year award. George Lohmann received the first award of its kind. Sachin received his in 1997 along with Phil Simmons, Sanath Jayasuriya, Mushtaq Ahmed and Saeed Anwar.

His 35th century was scored at Ferozshah Kotla, New Delhi. The previous record holder, Sunil Gavaskar was in the commentary box at that point of time. He accomplished this on 22nd December 2005.

He scored 117* in a Commonwealth Bank series match against Australia. This game was at the Sydney Cricket Ground and was played on 2nd March 2008.