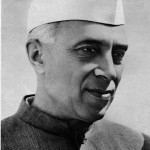 Born in an aristocratic family of Motilal Nehru, Jawaharlal Nehru emerged as one of the greatest political leaders of the world, ever. Jawaharlal Nehru was an active member of the Indian National Congress Party and later elected as the first Prime Minister of independent India. Nehru was at the helm of the political craft and one of the key leaders to frame and execute the initial policies. Nehru was greatly influenced by the Stalinist form of socialism and wanted to follow the same in India and introduced the first Five-Year Plan in 1951. Nehru’s contribution and role also changed the political equation during the cold war. He, along with world leaders like Gamal Abdel Nasser and Sukarno founded the Non Aligned Movement. The institution was formed to maintain equidistance from the power-blocs. This undoubtedly managed to create ripples in the centre of world politics. In 1944, during his stay in Ahmadnagar prison, Nehru wrote, “The Discovery of India”. The book tells about the History of India – from ancient times, to the formation of British India and the Indian Independence Movement.

Jawaharlal Nehru was born on 14 November 1889 in Allahabad, Uttar Pradesh. His father, Motilal Nehru was a noted advocate and an influential political leader. His mother Swarup Rani was a religious lady. Though, the Nehru family descended from Kashmiri Brahmin heritage their lifestyle was different from that of other Indian well-to-do family. The Nehrus followed a pro-western culture and lifestyle. At that time, when English was considered as the “official” language of the “elite” and spoken only at the professional area Motilal Nehru encouraged the family members to speak English at home.

In an attempt to take a proper care, Motilal Nehru had appointed teachers of English and Scottish origin at home. Jawaharlal Nehru was first sent to Harrow school and then to Cambridge University in England for further education. There Nehru qualified as a barrister. Nehru, during his stay in London, was attracted by the ideas of liberalism, socialism and nationalism. This was the period, when his interest to join the nationalist movement developed. He returned to India in 1912, and joined the Allahabad High Court Bar.

After his return from London, Nehru was married to Kamala on 8 February, 1916. Nehru reportedly was not happy with the marriage. The huge differences in terms of lifestyle and perspective of Nehru and Kamala could be one of the reasons for his annoyance. Kamala was brought up in a traditional Hindu Brahmin family and was more focused on the family affairs. Kamala found her life in a completely different platform. It hardly had any resemblance. She, as a result, almost isolated herself from the rest of the family. On 19 November, 1917 Indira Gandhi was born. Her grandfather Motilal Nehru would call Indira as “Priyadarshini”.

Nehru’s political career started at the Lucknow Session of the Indian National Congress Party in 1916. Interestingly, members of both “moderate” and “extremist” factions had come to attend the Session and moreover all the members unanimously called for “Swaraj” (self rule).

It is believed that Nehru’s interest and enthusiasm in politics developed more during Gandhi’s period. In 1920, Mahatma Gandhi called for the non-cooperation movement against the oppressive tax policies levied by the British. Nehru faced imprisonment for the first time in 1921. Nehru later said that the imprisonment helped him in realizing the importance of freedom. He used his time in jail in understanding the philosophy of Mahatma Gandhi and other political leaders. The imprisonment also increased Nehru’s popularity among the local leaders and grass root people.

Nehru started delivering political speeches to deal with the issues like Hindu-Muslim unity, self-reliance and poverty and employment. Nehru emerged as a popular political leader among the masses in northern India. His passion for social justice and equality attracted India’s Muslims, women and other minorities. His popularity gained importance following the arrest of senior leaders like Gandhi, Motilal Nehru. Few days later, Jawaharlal Nehru was also imprisoned along with his mother and sisters. After a serious differences in the party, some prominent Congress leaders, including his father Motilal Nehru left to join the newly formed, Swaraj Party in 1923. The decision undoubtedly led to Nehru’s disappointment but he negated the possibility of leaving Congress and Gandhi.

In 1924, Nehru was elected as the president of the Allahabad municipal corporation. He served there for two years. During his office, Nehru launched various schemes to promote education, water and electricity supply and reduce unemployment. Discontented with the corruption amongst the civil servants, Nehru resigned from his post. This further assisted in consolidating his acceptance as a leader. In 1926, Nehru took his wife and daughter to European nations. The visit actually meant for the treatment of Kamala Nehru, who was suffering from tuberculosis. The traveling included the developed European nations like Germany, France and the Soviet Union. There, Jawaharlal Nehru met various leaders from Communists, Socialists, and radical background. Though he was critical of the Stalinist autocracy Nehru was impressed with the socialistic form of economy. In 1927, he became a member of the League against Imperialism created in Brussels, the capital city of Belgium.

In the Guwahati Session of the Indian National Congress Party in 1928, Mahatma Gandhi sent an ultimatum to the British government asking it to grant dominion status to India within next two years. The time-period was later reduced to one year, reportedly under the pressure of Nehru and Subhash Chandra Bose. Meanwhile, Motilal Nehru framed, what came to be known as “Nehru Report” in 1928, favoring the concept of a “dominion status for India within the British rule”. Congress leaders, including Jawaharlal Nehru rejected the report and its recommendations. The dialogue with the British government over the “dominion status of India” failed. This increased the anti-British sentiment among the Congress leaders. In the Lahore session of the Indian National Congress Party in December 1929, Mahatma Gandhi advocated Nehru as the next president of the Congress. The decision of supporting Nehru was reportedly dome to abate the intensity of “communism” in the Congress.

Jawaharlal Nehru hoisted the flag of independence along the banks of the River Ravi on 31 December 1929. In 1931, Motilal Nehru passed away. Despite his death, Nehru family remained at the forefront of the nationalist movement. Nehru was arrested in 1931 and was imprisoned for four months. However, his popularity grew enormously and in 1936, Nehru was re-elected as the president of the Indian National Congress. Nehru as PM: In 1946, the Indian National Congress Party held a presidential election. The importance of the election’s stemmed from the fact that the chosen President would become the Prime Minister of independent India. On 15 August, 1947, Nehru became the first Prime Minister of India to hoist the national flag and make a speech from the ramparts of Red Fort.

In 1948, Mahatma Gandhi was assassinated by Nathuram Godse. The incident left Jawaharlal Nehru disappointed and alone. Acting towards the concept of socialism, Nehru in 1951, launched the country’s “First Five-Year Plan” emphasizing on the increase in the agricultural output. Nehru, being a follower of anti-imperialist policy, declared to support the efforts of small and colonized nations, in their liberation. Nehru was one of the founder members of the Non-Alignment Movement and kept India away from being a part of the global bifurcation.

In 1964, Jawaharlal Nehru suffered a stroke and a heart attack. On 27 May 1964, Nehru passed away. Nehru was cremated at the Shantivana on the banks of the Yamuna River, Delhi. In 1951, he was nominated for the Nobel Peace Prize by the American Friends Service Committee (AFSC).