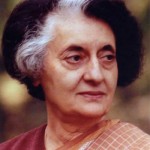 Indira Gandhi, Indira Priyadarshini Nehru (1917-1984), was born on November 19, 1917, in Allahabad, the only child of Jawaharlal Nehru, the first prime minister of India. A graduate of Visva-Bharati University, Bengal, she also studied at the University of Oxford, England. In 1938 she joined the National Congress party and became active in India’s independence movement. In 1942 she married Feroze Gandhi, a Parsi lawyer also active in the party. Shortly after, both were arrested by the British on charges of subversion and spent 13 months in prison. When India won its independence in 1947 and Nehru took office as prime minister, Gandhi became his official hostess. (Her mother had died in 1936.) She also served as his confidante on national problems and accompanied him on foreign trips.

Indira Gandhi – A brief biography, Biographies for kids In 1955 she was elected to the executive body of the Congress party, becoming a national political figure in her own right; in 1959 she became president of the party for one year. In 1962, during the Chinese-Indian border war, she coordinated civil defense activities. Following the death of her father in May 1964, Gandhi became minister of information and broadcasting in Lal Bahadur Shastri’s government. In this post she extended broadcasting time, liberalized censorship policies, and approved a television education project in family planning. When Shastri died suddenly in January 1966, Gandhi succeeded him as prime minister.

The following year she was elected to a 5-year term by the parliament members of the dominant Congress party. She led her party to a landslide victory in the national elections of 1971. In 1975 Gandhi was convicted of a minor infraction of the election laws during the 1971 campaign. Maintaining innocence, she charged that the conviction was part of an attempt to remove her from office and, instead of resigning, declared a national state of emergency on June 26. Although her conviction was soon overturned by the Indian Supreme Court, the emergency was continued. Gandhi placed many aspects of life in India under her strict control, and thousands of dissenters were imprisoned. Many saw in these actions the influence of her younger son, Sanjay Gandhi, a political neophyte on whom she relied more and more for assistance. Hoping to demonstrate popular support for her regime, which critics contended was undermining India’s democratic system, Gandhi called a general election in March 1977; She lost her seat in parliament, and the Congress party was defeated.

In the elections of January 1980, however, she made a spectacular comeback and was able to form a new majority government. When Sanjay died in a plane crash that June, she began grooming her older son, Rajiv Gandhi, as her successor. On October 31, 1984, after she had moved vigorously to suppress Sikh insurgents, she was shot to death by Sikh members of her security guard.