How To Upload iPhone Photos To Google+

How To Upload iPhone Photos To Google+ 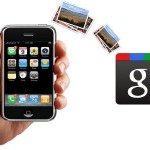 Who says Android phone users get to have all the fun uploading photos to Google+? You can do that with an iPhone, too, using any app that can send pics to Google’s very own image organizer, Picasa. You can give a try to any of the methods below until Apple approves the official Google+ app.

1. There is an app (available free on the App Store) called Piconhand. Once you have the app downloaded and installed, login with your Google credentials. You’ll see a list of your existing albums. Make sure that you have turned on location services for Piconhand. You can do it by tapping the Settings icon, then Location Services, and then scroll down to find Piconhand. Create a new album with name “iPhone Photos” or name it whatever you wish, perhaps a Circle name you’d like to give access to.

This gives you control of who gets to see these pics in Google+. Select “Upload” and then pick a Picasa album, but nothing happens until you tap “Start”. You’ll see a progress bar when the pics are uploading. After they are uploaded, go to Google+ and adjust the visibility of the album where you uploaded those photos, assigning that folder to the various circles you’d like to allow to see those pics.

Note: Some people have reported that Piconhand do not show up in Location Services of iPhone 3GS.

2. There is another app called Posterous that automatically and/or selectively allow for uploading to Picasa via email.

3. You can also just set up your Picasa settings to allow sharing photos via email: https://picasaweb.google.com/lh/settings Then you can email photos from your phone to a “Dropbox” album, which can then automatically share them on Google+