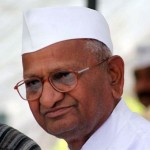 Kisan Bapat Baburao Hazare born on 15 January 1940, popularly recognized as Anna Hazare, is an Indian social activist who is particularly acknowledged for his contribution in order to the development of Ralegan Siddhi, a village in Ahmednagar district, Maharashtra, India and his efforts for establishing it as a model village, for which he was awarded the Padma Bhushan by Government of India, in 1992.

Anna Hazare is one of India’s well-acclaimed social activists. He calls himself fakir, a man who has no family, no property, no bank balance, and wears only khadi. Anna Hazate starts an agitation; every leader from Mumbai to Delhi sits up and takes notice. His small frail body has taken several blows from the countless agitations, tours and hunger strikes he has undertaken since he came in public life in 1975. He fought to make Relegan Siddhi a model village; Right to Information (RTI) implemented; and now fighting for the implementation of the ‘Jan Lokpal Bill’. Today, Anna Hazare is regarded as “The Gandhi of 21st century”.

Anna has served as a soldier for 15 years in Indian Army. He enlisted after the 1962 Indo-China war when the government exhorted young men to join the Army. At times, Hazare used to be frustrated with life and wondered about the very existence of human life. His mind yearned to look out for a solution to this simple and basic question. His frustration reached the peak level and at one particular moment, he also contemplated suicide. He had also written a two page essay on why he wants to live no more. He was influenced in his search after accidently coming across a book by Swami Vivekananda at a New Delhi railway station. He was inspired by Vivekananda’s photograph on the cover. As he started reading the book, he found answers to all his questions, he says. The book revealed to him that the ultimate motive of human life should be service to humanity. Striving for the betterment of common people is equivalent to offering a prayer to the God, he realized.

Anna rightly thought that Development is marred by corruption and started a new venture in 1991 called Bhrashtachar Virodhi Jan Aandolan (BVJA) or public movement against corruption. It was found that some 42 forest officers had duped the state government for crores of rupees through corruption in confederacy. Hazare submitted the evidences to the government but the latter was reluctant to take action against all these officers as one of the ministers of the ruling party was involved in the scam. A distressed Hazare returned the Padmashree Award to the President of India and also returned the Vriksha Mitra Award given by then prime minister of India Rajiv Gandhi.

He further went on an indefinite hunger strike in Alandi on the same issue. Finally, the government woke up from deep slumber and took action against the culprits. Hazare’s sustained campaign on this issue had a great effect – six of the ministers were forced to resign and more than 400 officers from different government offices were sent back to home.

Hazare realized that it was not enough to merely take action against fraudulent ministers or officers but to change the entire system that was studded with loopholes. Hence, he campaigned for the Right to Information Act. The state government turned a blind eye towards the pleas in this regard and so he first agitated in the historical Azad Maidan in Mumbai in the year 1997. To create mass public awareness about RTI amongst the youth, Hazare traveled extensively throughout the state. The government kept promising that RTI Act would be made but never raised this issue in the house or the state assembly. Hazare did not relent – he agitated at least ten times.

Finally, again he went on an indefinite hunger strike at Azad Maidan in the last week of July 2003. At last, the President of India signed the draft of the Right to Information Act after his 12-day-long hunger strike and ordered the state government to implement it with effect from 2002. The same draft was considered as the base document for the making of the National Right to Information Act-2005.

After the implementation of the RTI Act-2005, Hazare travelled for more than 12,000 Kms across the state creating awareness about the Act. In the second phase, he interacted with more than one lakh college students and also conducted mass public meetings across 24 districts of the state. The third phase included daily 2-3 public meetings in more than 155 tehsil places. In this massive campaign, posters, banners were displayed and more than one lakh booklets of the provisions of the Act were distributed at a nominal price.