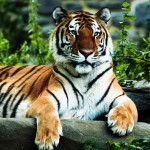 Tiger Facts and Information – Here are some wonderful facts about the Tiger. There were originally eight subspecies of tiger, the Javan, the Bali, the Caspian, the Indochinese, the Sumatran, the Bengal, the Siberian, and the South China tiger, The South China tiger being the antecedent of all tigers. And can you imagine that three of the eight subspecies are now extinct. The Bali tiger met its demise in the 1940’s, the Caspian in the 1970’s and the Javan in the 1980’s. Yes, its sad reality. Of theremaining tiger subspecies the South China tiger is the most critically endangered with only around sixty living in Chinese zoos and approximately twenty in the wild (although none have been spotted for over twenty years). This puts this subspecies at the very top of the endangered species list.