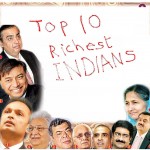 According to Forbes, Mukesh Ambani, the chairman and managing director of the conglomerate Reliance Industries, holds the top spot with a net worth of $22.6 billion. This is the fourth year in a row that he has held this top spot.

At number 2, though $6.9 billion less well off than last year, is again steel magnate Lakshmi Mittal with a net worth of $19.2 billion. He is the chairman and chief executive officer of ArcelorMittal, the world’s largest steelmaking company.

IT tycoon Azim Premji of Wipro remains at the third spot, with a net worth of $13 billion in 2012. He donated company shares worth $2 billion to his charitable trust which also makes him one of Asia’s top philanthropists.

The Ruia brothers, with a net worth of $10.2 billion, grab the fourth spot. They jointly own and manage the Essar Group, a multinational conglomerate corporation in the sectors of steel, energy, communications, shipping ports & logistics.

The telecom mogul, philanthropist and the founder, chairman and Group CEO of Bharti Enterprises, ranks sixth with a net worth of $8.8 billion. His company runs India’s largest GSM-based mobile phone service and world’s fifth largest wireless company with over 190 million customers across 19 countries in Asia and Africa.

With a net worth of $8.2 billion at the seventh rank, he is the first billionaire from the city of Ahmedabad. He is the chairman of the Adani Group, a leading trading and export company of India.

The Chairman of the Aditya Birla Group, one of the largest conglomerate corporations in India, is at the eight spot with a net worth of $7.7 billion. He is a fourth generation member of the legendary business Birla family from state of Rajasthan.

At the ninth spot, with a net worth of $7.6 billion, is the Irish-Parsi construction tycoon. He is the richest Irish national in the world and the richest person of Iranian descent. Mistry is an extraordinarilly low-profile billionaire, never giving interviews and rarely being seen out in public. With his 18.5% stake in Tata Sons, he is also the single largest shareholder in India’s largest private conglomerate Tata Group.

With a net worth of $6.8 billion, the industrialist and philanthropist stands at the tenth spot. He is credited for taking his family business to great height during controlled economy era and, in the post-liberalisation era, successfully meeting the challenges of globalisation.

Top 10 Languages Spoken in the World