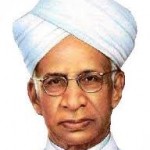 Sarvepalli Radhakrishnan was born on September 5, 1888 at Tirutani, Madras in a poor Brahmin family. As his father was poor Radhakrishnan supported most of his education through scholarships. Dr. Sarvepalli Radhakrishnan had his early education at Gowdie School, Tiruvallur and then went to the Lutheran Mission School in Tirupati for his high school. He joined the Voorhee’s College in Vellore and later switched to the Madras Christian College. He chose Philosophy as his major subject and did his B.A. and M.A. in it.

After completing his M.A., Sarvepalli Radhakrishnan, accepted an Assistant Lectureship at the Madras Presidency College in 1909. In college, he mastered the classics of Hindu philosophy, namely the Upanishads, Bhagvad Gita, Brahmasutra, and commentaries of Sankara, Ramunuja and Madhava. He also acquainted himself with Buddhist and Jain philosophy and philosophies of Western thinkers such as Plato, Plotinus, Kant, Bradley, and Bergson.

Sarvepalli Radhakrishnan was called to Oxford University, to deliver lectures on Hindu philosophy. He used his lectures as a platform to further India’s cause for freedom. He also argued that Western philosophers, despite all claims to objectivity, were biased by theological influences from their wider culture. He showed that Indian philosophy, once translated into standard academic jargon, is worthy of being called philosophy by Western standards. He thus placed Indian Philosophy on world map.