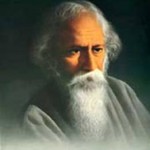 Mystic, painter and Nobel laureate for literature, Rabindranath Tagore was a prolific writer (3,000 poems, 2,000 songs, 8 novels, 40 volumes of essays and short stories, 50 plays), who drew inspiration both from his native Bengal and from English literary tradition. His major theme was humanity’s search for God and truth. He was awarded the Nobel Prize in Literature for his collection of well-known poems Gitanjali (Song Offerings).

Born in Calcutta on May 7, 1861, Rabindranath was the youngest of fourteen children. His father, Debendranath Tagore, was a Sanskrit scholar and a leading member of the Brahmo Samaj. Rabindranath’s early education was imparted at home. In school, while others use to learn their lessons, he would slip into more exciting world of dreams. Inspired by his older nephew, he wrote his first poem when he was hardly seven. At the age of seventeen, his first book of poems was published.

, Biographies for kids: 13_1.gif From 1878 to 1880 Tagore studied law in England, and in 1890, having returned to India, he took charge of his father’s estates, where he saw firsthand the suffering and backwardness of India’s rural poor and grew to love the serenity of the Indian countryside. Devoting himself to the agricultural development of the land and the health and education of the people, he founded, in 1901, Santiniketan (“Abode of Peace”), which became an international university with a wide-ranging curriculum. He was knighted in 1915, an honor he renounced four years later as a protest against the Jallianwala Bagh massacre by the British in India.

Tagore was keenly aware of India’s socio-political condition under British rule. He supported the Swadeshi movement and had been deeply influenced by the religious renaissance of 19th century India. Coming out strongly against orthodox rituals he wrote, “Leave this chanting and singing and telling of beads! Whom dost than worship in this lonely dark corner of a temple with doors all shut? Open thine eyes and see thy God is not before thee!” (Verse 11, Gitanjali)

Tragically, between 1902 and 1907, Tagore lost his wife, son and daughter. But out of his pain emerged some of his most tender work, including Gitanjali, published in 1910. Tagore remained a true patriot, supporting the national movement and writing the lyrics of the “Jana Gana Mana”, which is India’s national anthem.

Between 1916 and 1941, Tagore published 21 collections of songs and poems and held lecture tours across Europe, the Americas, China, Japan, Malaya and Indonesia. In 1924, he inaugurated the Viswa Bharati University at Santiniketan, an All India Centre for culture. Tagore died in Calcutta on 7th August 1941.

Tagore’s works are classics, renowned for their lyrical beauty and spiritual poignancy. He is remembered for his literary genius and Santiniketan remains flourishing institute. In Tagore’s own words, “The world speaks to me in colours, my soul answers in music”.

His profound symbolism, abetted by the free-flowing nature of his verse, create a universe of haunting beauty that expresses God’s infinite love and humanity’s deep compassion for all things beautiful.