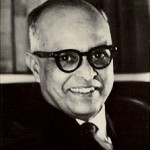 Nearly 70 years ago, India’s greatest living writer in English, took out a brand new exercise book and wrote in it: “It was Monday morning.”

With those four words, Rasipuram Krishnaswamy Narayan (just R.K. Narayan to most) took off on a journey to that oddly populated fictional continent called Malgudi, with the young boy Swami and his eclectic mix of friends.

“The very first line I wrote was ‘It was Monday morning.’ And then I had an idea of a railway station, a very small railway station, a wayside station. You’ve seen the kind of thing, with a platform and trees and a stationmaster.

The railway station to which Swami goes to watch trains arrive and depart: that was the original idea with which I started ‘Swami and Friends’.

R.K. Narayan – A brief biography, Biographies for kids: 45_1.gif But in the actual book it comes last, it comes at the end of the story,” wrote Narayan much later, remembering his first work. The writer turned 94 on Oct 6, 2000.

Despite the overwhelming success of his semi-autobiographical, self-mocking vignettes of small-town childhood in ‘Swami and Friends’, Narayan very nearly missed the call to fame and recognition.

“Deluged under rejection slips”, it was only the fortuitous arrival of his manuscript on well-known writer, Graham Greene’s desk, which made his entry into the “real world” possible.

Having read the manuscript, Graham Greene recommended it to publisher Hamish Hamilton who promptly agreed to publish it. Some seven decades later, Malgudi occupies an almost real space on the Indian map.

Seventeen novels and 300 short stories later, Narayan, continues to be one of India’s most prolific and most stylish writers in the English language. Some of his best known works are ‘The Bachelor of Arts’, ‘The Dark Room’, ‘The English Teacher’, ‘Mr Sampath’, ‘The Financial Expert’, ‘Waiting for the Mahatma’, ‘The Guide’, ‘The Man-eater of Malgudi’, ‘The Talkative Men’ and ‘Malgudi Days’.

But writing was not a profession to be entertained for a young man straight out of college. After graduation, Narayan worked as a teacher in a high school and as a journalist for a few years.

Yet, teaching proved to be an unsatisfying experience after which writing ‘Swami and Friends’ became part of a businesslike routine that the writer pursued with a serious face.

In India, Narayan’s books crowd the syllabuses of schools and colleges as novel after novel becomes ‘required reading’, though one of the most respected Indian literary awards, the Jnanpith award, has eluded him for an ironical reason. It is given to a writer in Indian languages and Narayan has chosen to write in English.

The writer won his first major Indian award when he won the Yatra Award, given every year for outstanding achievement by a writer from South Asia, in 1994.

The citation said, “Mr. Narayan has created with quiet honesty and moral seriousness, a unique fictional world out of the ordinary and daily lives of people in the small towns of the South. He is a master story-teller whose language is simple and unpretentious, whose wit is critical yet healing, whose characters are drawn with sharp precision and subtle irony and whose narratives have the lightness of touch which only the craftsman of the highest order can risk…”

The 1994 award is a long way from the first prize that Narayan won in 1930, in a short story competition organised by a magazine. When the editor asked him about his future plans, Narayan seems to have replied, “I hope to write till my fingers fall off.” Happily, 70 years later, neither have Narayan’s fingers fallen off, nor have ours grown tired of thumbing through his absurd caricatures and grotesqueries.