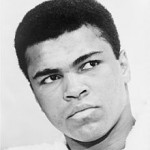 American boxer Cassius Marcellus Clay Jr, was born on January 17, 1942 in Louisville, Kentucky. Better known as Muhammad Ali, he was perhaps the most celebrated sports figure in the world during most of the 1960s and ’70s. His rise to prominence may be attributed to a combination of circumstances his role as a spokesman for and idol of blacks; his vivacious personality; his dramatic conversion to the Black Muslim religion; and most important, his staying power as an athlete. Ali first came to world attention in 1960, when he won the Olympic light-heavyweight championship.

He then won a controversial championship bout from Sonny Liston in 1964 to gain the heavyweight title. He produced a steady stream of headlines. The fight was questioned because Ali seemed to be quitting before the bout was over. After that he produced a steady stream of headlines. He then changed his name to Muhammad Ali. He was the first boxer to benefit from satellite television, making him all the more visible.

Ali, however, proved to be a “fighting champion,” accepting the challenges of every heavyweight with ranking credentials. He was stripped of his title in 1967 for refusing to join the Army during the Vietnam War. The government prosecuted him for draft dodging and the boxing commissions took away his license. He was idle for three and a half years at the peak of his career. In 1971 the Supreme Court ruled that the government had acted improperly and was allowed to resume fighting. He won back the championship in 1974 in about with George Foreman.

He lost the crown again in 1978 to Leon Spinks but regained it the same year, thus becoming the first man to win the title three times. Other than Joe Frazier (in 1971) and Spinks, the only boxers to defeat Ali, who had a 55-5 record, were Ken Norton (1973), who later lost to Ali; Larry Holmes (1980), who foiled Ali’s try for a fourth heavyweight championship; and Trevor Berbick (1981), after which fight Ali retired. The Ali-Frazier fights rank among the greatest in fistic history. In later years Ali developed Parkinson’s disease, caused by blows to the head from boxing.