Manmohan Singh is the 13th and current Prime Minister of India. He is the only Prime 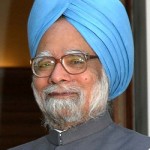 Minister since Jawaharlal Nehru to return to power after completing a full five-year term. A Sikh, he is the first non-Hindu to occupy the office. Singh is also the 7th Prime Minister from the Indian National Congress (Congress) party. He is a four-time Member of Parliament from the Upper House of the Parliament of India, the Rajya Sabha, representing the state of Assam.[4] His term in the 14th Lok Sabha was from 22 May 2004 to 26 February 2009. In the 15th Lok Sabha his term started 22 May 2009 and is scheduled to continue till 2014.

Born in Gah, Punjab in British India (now Pakistan) in 1932, he migrated to India with his family at the time of Partition in 1947. Singh studied at Punjab University, University of Cambridge and University of Oxford.Thereafter, while Singh was working at United Nations Conference on Trade and Development (UNCTAD), Lalit Narayan Mishra, the then Indian Minister for Foreign Trade, appointed Singh as an advisor to his ministry. He was appointed Governor of the Reserve Bank of India between 1982 and 1985,Deputy Chairman of the Planning Commission of India from 1985 to 1987 and Secretary General of the South Commission from 1987 to 1990.Elected to the Rajya Sabha in 1991, he was inducted into Prime Minister P. V. Narasimha Rao’s cabinet as Finance Minister the same year, a post he held until 1996. His tenure as Finance Minister is best remembered for the economic reforms he carried out, which ended the Licence Raj system and helped open the Indian economy.

When the Congress-led United Progressive Alliance (UPA) came to power after the 2004 general elections, Singh became Prime Minister when Congress President Sonia Gandhi unexpectedly declined the position. In 2009, the UPA and Singh were reelected for a second consecutive five year term.

After completing his D.Phil, Singh worked for United Nations Conference on Trade and Development (UNCTAD) from 1966–1969. During the 1970s, he taught at the University of Delhi and worked for the Ministry of Foreign Trade with the former Cabinet Minister for Foreign Trade, Lalit Narayan Mishra. As the Minister of Foreign Trade, Lalit Narayan Mishra was one of the first to recognize Singh’s talent as an economist and appointed him his advisor at the Ministry of Foreign Trade. Mr. Singh and Mr. Mishra first met, coincidentally, on a flight from India to Chile. Mr. Mishra was on his way to Santiago, Chile, to attend an UNCTAD meeting.

In 1982, he was appointed the Governor of the Reserve Bank of India and held the post until 1985. He went on to become the deputy chairman of the Planning Commission of India from 1985 to 1987. Following his tenure at the Planning Commission, he was Secretary General of the South Commission,an independent economic policy think tank headquartered in Geneva, Switzerland from 1987 to 1990.
Finance Minister of India.

In 1991, India’s Prime Minister at the time, P.V. Narasimha Rao, chose Singh to be his Finance Minister. At this time, India’s fiscal deficit was close to 8.5 per cent of the gross domestic product, the balance of payments deficit was huge and the current account deficit was close to 3.5 percent of India’s GDP. India’s foreign reserves barely amounted to USD$1 billion, enough to pay for a few weeks of imports, in comparison to USD$283 billion today.

Resume of Dr. Manmohan Singh, Prime Minister of India, and the original Architect of the Economic Liberlization.