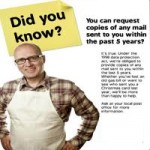 Here are some interesting, but true facts, that you may or may not have known