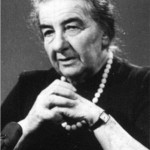 A founder of the state of Israel, Golda Meir was born on May 3, 1898, in Kyyiv, Russia (now Ukraine), and originally named Goldie Mabovitz or Mabovich. Her father immigrated to Milwaukee, Wisconsin, in 1905, and was joined by his family in 1906. She graduated from Milwaukee Teachers College, and in 1917 married Morris Myerson or Meyerson, whom she had met while attending high school in Denver, Colorado, in 1913. While still in her teens she became a Zionist, dedicated to building a homeland for Jews. In 1921 she and her husband immigrated to Palestine (now Israel).

Remaining active in Zionist affairs and in the labor movement, Meir served throughout the 1930s and ’40s in various Zionist organizations in Palestine, Europe, and the United States. She was a signer of the proclamation of the independence of the state of Israel in 1948 and served as her country’s first minister to the USSR in 1948 and 1949; she was elected to the first Knesset, or parliament, of Israel and named minister of labor and social insurance in 1949.

Having separated from her husband in 1945, she Hebraized her surname to Meir in 1956. That same year she became minister of foreign affairs and held that post until 1966, when she resigned from the cabinet. She served, successively, as secretary-general of the Mapai party and of the united Israel Labor party from 1966 to 1968. She was prime minister from 1969 to 1974, when she resigned amid controversy over Israel’s lack of preparedness in the Yom Kippur War of 1973. Meir died in Jerusalem on December 8, 1978.