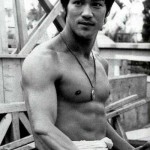 The Chinese American actor Bruce Lee, was born in San Francisco on November 27, 1940. Born a sickly child, he was named Li Jun Fan a female name by his mother to ward off evil spirits. His dad an Hong Kong opera singer returned back to Hong Kong along with his family in 1941.

As a kid martial arts and bodybuilding were his only preoccupation, studies didn’t interest him. In 1946 he appeared in first of many films as a child actor. He appeared in 20 movies and rarely in school. He soon became involved with a gang and his mother shipped him back to America before his 18th birthday so he could claim his dual-citizenship and avoid winding up in jail.

He soon picked up a job teaching the Wing Chun style of martial arts that he had learned in Hong Kong. Lee also studied philosophy at the University of Washington, at the same time acquiring his considerable skills in the martial arts like karate, kung-fu, and so on. Shortly after, Lee landed his first US show-biz role — Kato in The Green Hornet, A 1966-67 TV superhero drama from the creators of Batman. However, Lee could not get Hollywood to embrace him and hence returned to Hong Kong to make films.

He made the Fists of Fury (1971), his martial arts debut. Almost immediately, he became a cult figure, and the world-wide martial arts phenomenon was under way. The plots of all films he made were uniform: Lee makes a vow not to fight; people close to Lee are exploited and Lee kills in retaliation. The films set box-office records in Asia and Hollywood finally gave him an action movie. But Lee died a month before the release of his first US film Enter the Dragon, considered the king of Kung–Fu movies. During the filming of Game of Death Lee died mysteriously of brain edema.