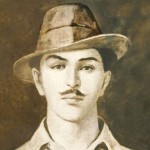 March 2001: March 23 is the death anniversary of one of the most heroic figures of the Indian freedom movement. Few people remembered it, though. Forget the rest of India, even the children of the village where he was born, do not know anything about him.

And to think that the young man in question, Bhagat Singh, gave up his life for the ideal of a free and better India! Today, over 50 years after Independence, the people of his village still do not have access to drinking water and a tap, writes The Indian Express newspaper.

Bhagat Singh was born on September 27, 1907, in Khatkar Kalan, Punjab, in British India. His grandfather Arjan Singh, father Kishan Singh and uncle Ajit Singh, were all active in the freedom struggle.

While studying at the local D.A.V. School in Lahore, in 1916, young Bhagat Singh came into contact with some well-known political leaders like Lala Lajpat Rai and Ras Bihari Bose.

Bhagat Singh – A brief biography, Biographies for kids:  In response to Mahatma Gandhi’s call for non-cooperation against British rule in 1921, Bhagat Singh left his school and joined the National College newly opened at Lahore. At this college, which was a centre of revolutionary activities, he came into contact with revolutionaries such as Bhagwati Charan, Sukhdev and others. He became a member of the Hindustan Republican Association formed by the revolutionaries of Uttar Pradesh and was initiated into their firebrand activities.

The revolutionaries were branded as terrorists by the British government. They believed that given the unjust and oppressive nature of British rule, it was legitimate on their part to use violence as a weapon to overthrow the foreigners. So, they used bombs and guns against Britishers and robbed establishments belonging to the British or their sympathisers.

Their ideas differed from the Gandhian idea of a freedom movement based on non-violence or ahimsa. Gandhi’s ideas went on to become more prominent as the Indian freedom movement progressed.

But it is not merely as a bold militant-type figure that Bhagat Singh is remembered today. He was also a thinker who was steeped in the best traditions of socialistic thought, the theory that advocated collective or state ownership of the means of production – land, labour and capital. This is borne out in the numerous letters, pamphlets and articles that he wrote in the course of a short but turbulent life.