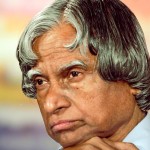 Kalam’s father was a devout Muslim, who owned boats which he rented out to local fishermen and was a good friend of Hindu religious leaders and the school teachers at Rameshwaram. APJ Abdul Kalam mentions in his biography that to support his studies, he started his career as a newspaper vendor. This was also told in the book, A Boy and His Dream: Three Stories from the Childhood of Abdul Kalam by Vinita Krishna. The house Kalam was born in can still be found on the Mosque street in Rameshwaram, and his brother’s curio shop abuts it. This has become a point-of-call for tourists who seek out the place. Kalam grew up in an intimate relationship with nature, and he says in Wings of Fire that he never could imagine that water could be so powerful a destroying force as that he witnessed when he was thirty three.

That was in 1964 when a cyclonic storm swept away the Pamban bridge and a trainload of passengers with it and also Kalam’s native village, Dhanushkodi. Kalam is a scholar of Thirukkural; in most of his speeches, he quotes at least one kural. Kalam has written several inspirational books, most notably his autobiography Wings of Fire, aimed at motivating Indian youth. Another of his books, Guiding Souls: Dialogues on the Purpose of Life reveals his spiritual side. He has written poems in Tamil as well. It has been reported that there is considerable demand in South Korea for translated versions of books authored by him. Kalam has also patronised grassroots innovations. He is closely associated with the Honey Bee Network and The National innovation Foundation. The NIF is a body of Government of India and operates from Ahmadabad, Gujrat.

Apart from being a notable scientist and engineer, Dr APJ Abdul Kalam served as the 11th President of India from the period 2002 to 2007. He is a man of vision, who is always full of ideas aimed at the development of the country and is also often also referred to as the Missile Man of India. People loved and respected Dr APJ Abdul Kalam so much during his tenure as President that was popularly called the People’s President. Read more about the biography of Dr APJ Abdul Kalam here.

Read on about the life history of Dr APJ Abdul Kalam, who’s also the first scientist and bachelor to occupy the seat of the Rashtrapati Bhavan. His perspectives on important topics have been enunciated by him in the book ‘India 2020′. It highlights the action plans that will help develop the country into a knowledge superpower by the time 2020. One thing for which he received ample kudos is his unambiguous statement that India needs to play a more assertive role in international relations.

And Dr APJ Abdul Kalam regards his work on India’s nuclear weapons program as a way to assert India’s place as a future superpower. Even during his tenure as President, APJ Kalam took avid interest in the spheres of India’s science and technology. He has even put forward a project plan for establishing bio-implants. He is also an ardent advocate of open source software over proprietary solutions to churn out more profits in the field of information technology in India.

2) “Be more dedicated to making solid achievements than in running after swift but synthetic happiness.”